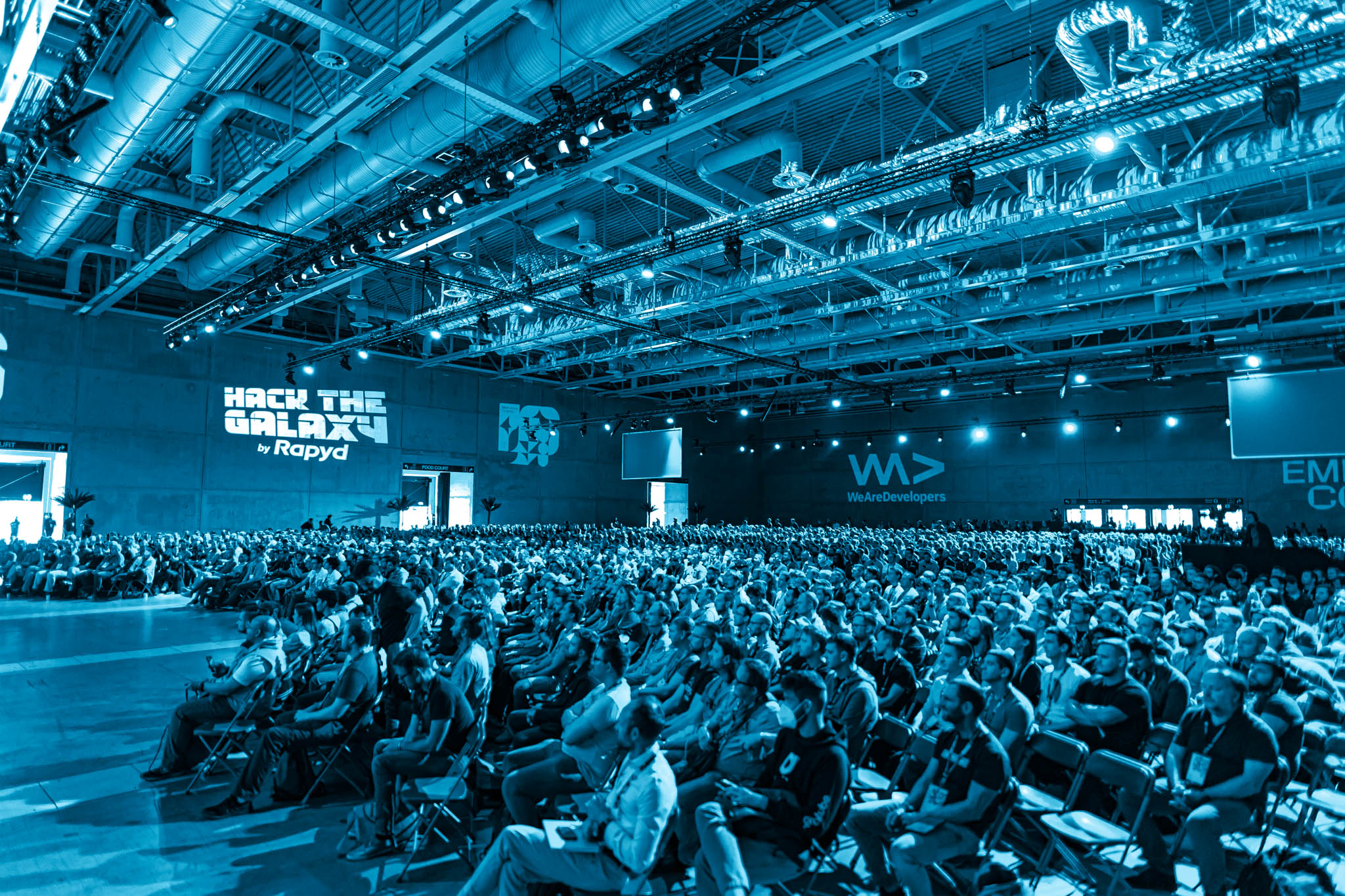 After 1103 days, the world’s most important event for developers had finally happened again on June 14-15th! CityCube Berlin got swarmed with programmers from all over the globe and, needless to say, we all had a great time. In case you missed it or would like to revisit our awesome gathering some days ago, here are 8 moments that defined this year’s WeAreDevelopers World Congress:

“AI is not our competitor but a copilot”, said Thomas Dohmke, the CEO of GitHub during his opening keynote on June 14th. Since GitHub is one of the programmers’ most important websites today, it was obvious that there would be a full-house to hear GitHub’s CEO share his knowledge. Thomas talked about his connection to Berlin, and his history as a developer, however, one of the main takeaways from his talk was the introductory presentation about the GitHub Copilot.

In essence, GitHub Copilot is an AI pair programmer that helps you write code faster and with less work, sort of like an auto-complete function. It’s powered by OpenAI Codex and it sends your comments and code to the GitHub Copilot service, which then uses OpenAI Codex to synthesize and suggest individual lines and whole functions. It’s hard to believe how far coding has come and we’re super excited to see where it takes us from here!

2. Joel Spolsky expressed his thoughts on AI being the copilot in coding

After hearing the news about GitHub Copilot, we were curious to hear what Joel Spolsky, the founder of Stack Overflow, thinks about it. To no surprise, Joel made a statement about it during his awesome talk about how we messed up the WorldWideWeb and how to fix it.

When it comes to artificial intelligence being our copilot in coding, Joels believes that we shouldn’t rely solely on AI to help us write better code. He argues that if the code is predictable from the start in such a manner that AI can auto-complete it, then it could just be a subroutine, a framework, or a library as well. “You should not be repeating big blocks of code that other people already used, we’re not builders, darn it.”, said the founder of Stack Overflow.

3. Our partners Rapyd are sending people to space, literally

While exploring the expo area, you might have noticed an actual rocket surrounded by astronauts in space suits. Naturally, you might have asked yourself what’s it all about and we’re here to tell you that Rapyd, one of our event partners, is sending devs to space. Seriously, you can win a vacation for two in space.

Here’s how it works: sign up for the Rapyd developer community where you’ll find coding puzzles. Each puzzle unlocks an entry in the next drawing for tickets to space with Space Perspective and other out-of-this-world prizes. If you’re the lucky winner, you can win a once-in-a-lifetime trip to space or a $130,000 cash prize provided by one of the world’s leading fintech companies, Rapyd.

If you paid a visit to a previous WeAreDevelopers World Congress, the chances that you saw Joel Spolsky are pretty high. It’s not a secret that the relationship between us and Joel is a lovely one. However, even after all these years hearing compliments from Joel just makes our day so much better.

As mentioned earlier, during this year’s congress Joel talked about how we messed up the WWW and proposed his idea on how to fix it. Expectedly, the talk was a perfect mix of information and humor and it was definitely one of the highlight talks during the event. However, the moment that made our already-awesome day so much better is when Joel gave us an amazing compliment backstage that WeAreDevelopers World Congress is his personal favorite event. It means a world to us, thank you so much, Joel.

5. DOOM II Deathmatch: Romero VS. Everyone

After his amazing speech on Wolfenstein 3D being developed by 6 people in 6 weeks, John Romero embarked on a mission to frag literally everyone in a DOOM II deathmatch. Whoever was willing to take their chance against the creator of FPS himself, and whoever was lucky enough to be chosen by the flying duck, could put their shooter skills against the man who created the genre.

It was a sight to behold: John Romero owning everybody at DOOM II, to no surprise, in front of over 500 devs and gamers. Honestly, the outcome was expected, but the thing that struck us was just how easily John was able to keep cool and continue destroying everyone at this legendary game. Like a true gentleman he is, John made sure to give compliments and advice to his opponents while playing, and we’re sure that created life-long memories for the lucky devs who got the chance to play against the creator himself.

When Bjarne Stroustrup was confirmed as a speaker at World Congress 2022, everybody knew his talk was going to be legendary. Bjarne’s talks are like university lectures but way cooler, way more engaging, and way more entertaining (nothing against universities, please stay in school kids). As you may guess, his talk was met with a full main stage hall of developers left in awe afterward.

However, one lecture was just not enough. After talking about the evolution of C++ on the main stage during the morning of the second day, Bjarne gave a more high-level talk on using C++ in constrained environments the same day afternoon on a side stage with around 500 people attending. Needless to say, whoever was asked about talks during which they learned the most, Bjarne’s talks were always in the top three mentions. Pro tip: check out these top 10 C++ job interview questions.

7. We partied with Tiësto and Vintage Culture

The end result? Tiësto, Vintage Culture, and Skazi at Kraftwerk Berlin exclusively for the attendees of WeAreDevelopers World Congress 2022. It almost sounds too good to be true, but believe us it was true and it was mind-blowing. In the end, even our CEO got up on the stage to hype up the crowd. You simply had to be there to experience it.

Finally, perhaps the moment that got the loudest applause during the whole event was the one after Chris Heilmann, principal program manager at Microsoft, confirmed that Internet Explorer has officially died. It happened during the closing session of World Congress 2022, and even though we felt a bit sorry for Internet Explorer, we couldn’t help but smile and laugh after witnessing the crowd's reaction to this (bad) news.

The myth is that IE had actually died a long time ago, but it just took all this time for it to receive the news. Okay, that joke is a kind of overdone, excuse it. In all seriousness, rest easy Internet Explorer, you were a great browser for downloading other browsers.

There they are, 8 moments that defined and shaped WeAreDevelopers World Congress 2022. To all of you who joined us for those two wonderful days, thank you so much. We hope you had at least as much fun as we did. On the other hand, in case you missed it, you are more than welcome to join us next year.

We are now off to a short summer break before we kick off the new season of WeAreDevelopers Live talks. In the meantime, stay cool, stay hydrated, and see you soon again! ❤️

The most important tips to speed up your WordPress site

Buckle up – let's explore the seven most important ways to speed up your WordPress website.

Top big data technologies that you need to know

Quite possibly the most advancing technology in today’s world is big data. Here are the top big data technologies you just have to know.
by
Dhannush Subramani
Apr 25, 2022